Many years ago Lennie Wilker, my first husband, and I wrote an annual “Holiday Letter” that updated our friends about the latest happenings in our family.  Sometimes it was sent before the end of December.  Occasionally it wouldn’t get written or sent–yes, in an envelope with a stamp–until later by a couple of months.  I thought it would be nice to update my Blog with a new Holiday Letter.

The Holiday Season beginning with Thanksgiving and continuing until the day after the New Year is a festive time for me.  Here in Nicaragua it’s beginning to look a lot like Christmas too.  Now that most of the rural homes have electricity, those families that live above the survival level are decorating their homes with a few lights.  Other families have small cardboard images of Santa Claus and other commercial Christmas figures hung on their doors or stuck on palas (sticks) in their yard.  It is surprising to me to see how fast the commercialism of the US has spread to us here in rural Nicaragua.

Managua is a whole other level of splendor and Holiday paraphernalia.  The rotundas are decorated with gigantic figures of Nativity scenes, Christmas trees–all metallic–and Santa with Elves.  There isn’t enough money in the government treasury to pay for employees but somehow there is funding for these elaborate displays.  OK, that statement is out of line for a cheery holiday spirit.  Needless to say it bugs me though to see this dichotomy of resources.

My tribute to the Holidays is to do a little decorating at Condo 1B.  My roommate/tenant, Sherry, helped me make a wreath with greenery from around the yard and a pine cone that I purchased at Sinsa, the biggest hardware chain in NI.  I also picked up a little wooden stick Christmas tree that has tiny lights.  It is battery operated so we can see the tree and lights from almost everywhere inside and the front terrace.

My biggest event for the season will be a piñata party at my Guzmán Family’s compound in the village.   I got a large white headless angel piñata and will fill it with the carmelos (candies) that are usually expected with a piñata.  I decided that the headless angel was a better idea than beating to death a piñata that looked like a real angel figure.  Last year the circular Santa face piñata that I found was filled with 5 cordoba coins and no candy.  It was truly fun and every child in the compound under 12 years old also got a piggy bank to put in their found coins.  This year isn’t going to be as lavish an event as I made last year.  I can’t afford that extravagance again, however, I did a lot debating before deciding against a repeat performance.  The party will be in the afternoon on Christmas Day.  I know everyone will enjoy the cake and juice and the kids will knock each other over in the scramble for the piñata candy.

I’m spending many hours most days working on the English as a foreign language (EFL) textbooks that I am writing with Kathy Ramirez.  Two books completed five to go before January 11th.  So I’m stopping this blog now and getting back to work.

Happy Holidays to EVERYONE. 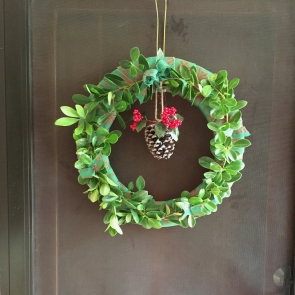 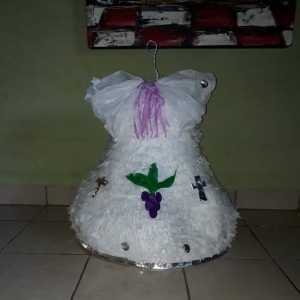 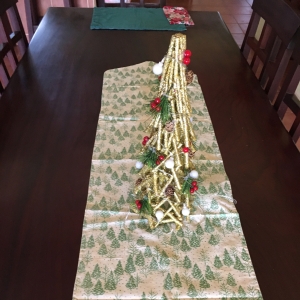 3 thoughts on “Navidad in Nicaragua”